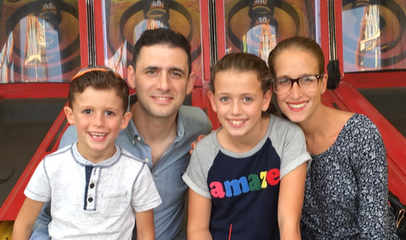 ​We fondly remember Ben Grossman, our dear friend who passed away from a brain tumor in July 2017.  To say that he was a stellar individual who excelled in all his roles - as a husband, father, son, friend and businessman - still does not begin to capture the myriad of qualities that he possessed.

Ben was born on January 15, 1980 in New York City. He spent his formative years there and completed his education at Yeshiva University.  He started working in commercial real estate when he  joined the Meridian Capital Group in 2001 at the young age of 21.  He quickly advanced within the firm and subsequently moved to Los Angeles in 2006 to re-establish Meridian’s office and was extremely successful in expanding their role within the LA real estate community.   He was the recipient of the coveted honor, “Thirty Under 30” in 2009 at the age of 29, an award recognizing Southern California’s best and brightest rising all-stars in the field of real estate.  His word was his bond and he was well-respected and trusted by all with whom he came in contact.

On a personal level, he met and married his wife, Rivka Sturm, in 2003 and was the proud father of two children:  Arielle in 2005 and Avinoam in 2009.  He was always an involved and loving father and coached both his children’s teams in baseball and basketball.  There are no adequate words to describe the loss to his family and the vacuum he left, and simply put,  his wife and children were the center of his universe.

He was always active in the Jewish community across the spectrum of Orthodoxy.  He was involved in kiruv work, was always looking to welcome new members of the community to his home and was connected to the Young Israel of Century City, Beth Jacob Synagogue and Adas Torah.  He was also an avid supporter of Mercaz HaTorah Kollel and shared a close relationship with Rabbi Baruch Gradon.  He personally felt a communal responsibility and was a tremendous baal tzedakah to many different organizations.  He was also a beautiful baal tefillah and his meaningful and poignant davening inspired us all.

He is sorely missed by all of us.  Yehi zichro baruch.